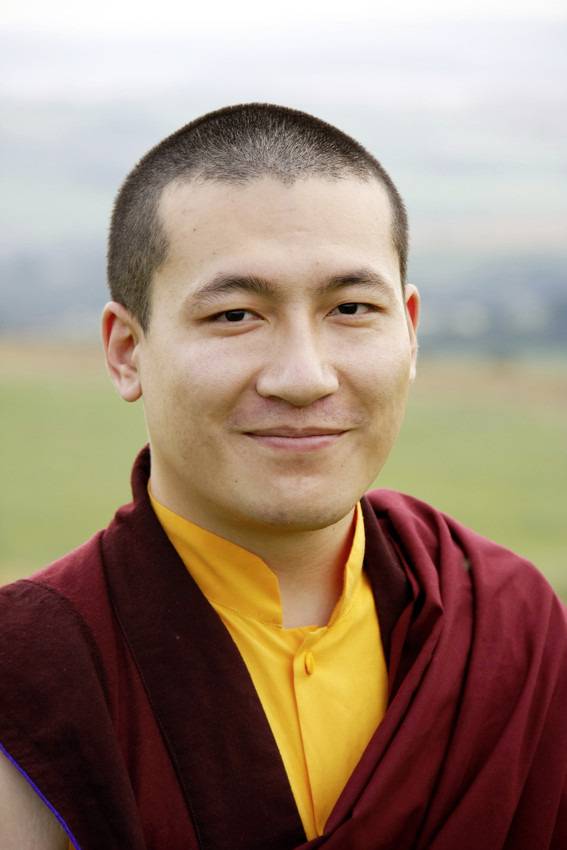 Thaye Dorje, His Holiness the 17th Gyalwa Karmapa is the head of the Karma Kagyu lineage of Tibetan Buddhism. He is the spiritual leader of around 900 monasteries, institutions and centers in 68 countries around the world.
Karmapa regularly visits Diamond Way Buddhist centers around the world. He has often given teachings and empowerments at the Europe Center in Germany, the main international meeting point for Diamond Way Buddhists. Lama Ole Nydahl describes Karmapa as being the guarantor for the authenticity of our Karma Kagyu lineage.

Karmapa was born in Lhasa in May 1983 and was given the name Tenzin Kyentse by his parents. His father is the third Mipham Rinpoche, an important lama of the Nyingma tradition. His mother, Dechen Wangmo, comes from a noble Tibetan family, which traces its roots back to the fabled King Ling Gesar. The family lived in the Bharkhor, a famous area in the center of the Tibetan capital, where pilgrims and locals make devotional circumambulations of the Jokhang Temple. As a small child, Tenzin Khyentse repeatedly stated that he was the Karmapa. At this time, many people were searching for the reincarnation of the 16th Karmapa Rangjung Rigpe Dorje.

In 1986, based on the instructions of the 16th Karmapa, his own dreams, as well as information and a photo of the young Karmapa given to him by a visitor who had just been to Lhasa, Chobgye Trichen Rinpoche, a lineage holder and highly respected master of the Sakya tradition of Tibetan Buddhism, told Shamar Rinpoche about the child. As the second highest lama of the Karma Kagyu lineage, Shamar Rinpoche is, according to tradition, responsible for finding the Karmapa. Upon receiving this information he asked Lopön Tsechu Rinpoche, a close confidante of the 16th Karmapa, to visit the boy in Lhasa on his behalf. Lopön Tsechu Rinpoche returned with detailed information about the young Tenzin Khyentse and his family and reported that the boy had recognized him at their first meeting. Later, high lamas of the Karma Kagyu lineage went to Tibet to meet the young Karmapa and his family, who had to keep his identity secret.

In early 1991, after doing a meditation retreat, evaluating further information, and conducting traditional tests, Shamar Rinpoche publicly announced during an inauguration of a monastery in Nepal that the new Karmapa lived in Tibet and was to be named Thaye Dorje, meaning “Unlimited Unchanging Buddha Activity”.

In 1994, assisted by Western students, the young Karmapa and his parents fled Tibet and went to India. In the same year, Shamar Rinpoche enthroned him at the Karmapa International Buddhist Institute (KIBI) in New Delhi. Many visitors from around the world attended the ceremony.

On March 25, 2017 Karmapa married his wife Sangyumla Rinchen Yangzom. Karmapa and Sangyumla were close childhood friends. Over time and with the blessings of their parents, this friendship grew into a special spiritual connection. On 11 August 2018 their son Thugsey was born in France. The 17th Karmapa thus follows the examples of the 10th and 15th Karmapa, who were also married and had children.