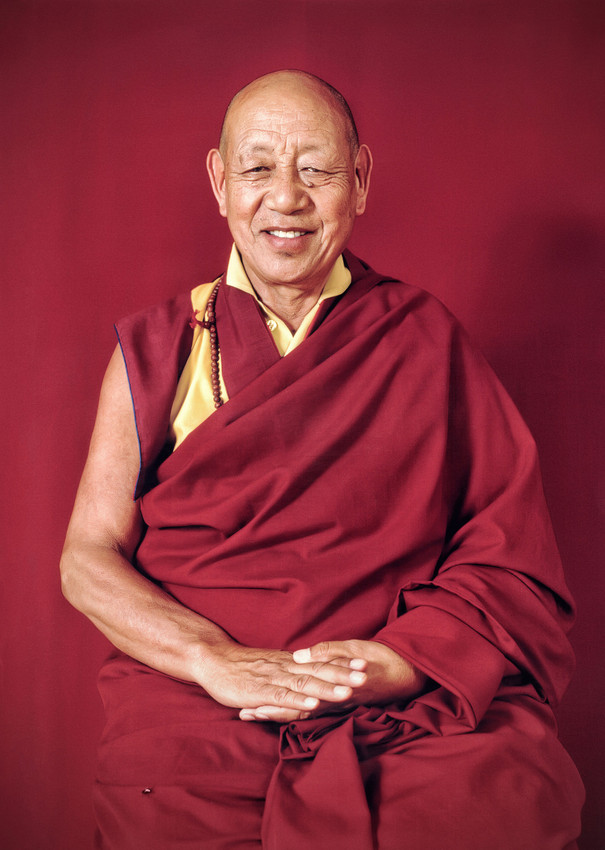 Lopön Tsechu Rinpoche was a key figure in Buddhism in Nepal and had an enormous influence in the West. He oversaw the construction of the largest Buddhist stupa in the West and gave numerous teachings.

Lopön Tsechu Rinpoche was born in the Kingdom of Bhutan in 1918. At the age of 13, he left Bhutan to study and practice in Nepal under the spiritual guidance of his uncle Lama Sherab Dorje. There he received extensive Dharma training and meditated under difficult conditions in the caves of Milarepa and at the holy sites of Guru Rinpoche.

In 1944 Rinpoche H.H. meets the 16th Gyalwa Karmapa, who becomes one of his most important teachers.
In the following years, Lopön Tsechu Rinpoche became a key figure for Dharma practitioners in Nepal, with his main monastery being in Kathmandu. In 1987 he travelled to Europe for the first time at the invitation of his first Western disciples, Lama Ole Nydahl and his wife Hannah.

He subsequently travelled extensively throughout Europe, North and South America and Australia, giving teachings and countless initiations. He completed the construction of a Kalachakra stupa in Spain and more than 16 other stupas in Europe and Asia. Lopön Chechu Rinpoche's last project, the Stupa of Enlightenment in Benalmadena, Spain, is the jewel of his life's work.

Rinpoche died on 10 June 2003 at the age of 85, four months before the inauguration of this magnificent project. The immense power of his compassion is felt by people from all over the world and benefits all beings.